I’m going to be honest with you…it’s been difficult to pin down Kristin for this month’s interview. She is so busy these days. She jet sets all over Europe (which I wish I could also do), and she’s making some major moves as a global ambassador for the Arts and culture… Here’s the latest scoop on what’s going on with my BFF!

Amerie: It is. Why has it been a month since we last caught up with each other? Each attempt to reach you went straight to voice mail.
Kristin: Has it really been a month? I guess that time really does fly when you’re having fun…(laughing)! But sincerely I apologize for having missed your calls. I’ve been expanding the activities of the Kristin Lewis Foundation by creating a second Foundation based in Vienna, Austria. I am very excited about this new venture because it will allow for me to have greater reach toward positively impacting the lives of many others. One of the activities of the Austrian organization, which is called Kristin Lewis International Verein für Ausbildung und Förderung junger Künstler (which translates as the Association for the Education and Development of Young Artists), will hosts its inaugural concert this September. It will be held in a very beautiful cathedral in the center of Vienna. It is called the Minoritenkirche (in English called the Friars Minor Conventual Church). It is a magnificent structure that was built in the 13th century. An interesting fact is that it actually took 100 years to build it. 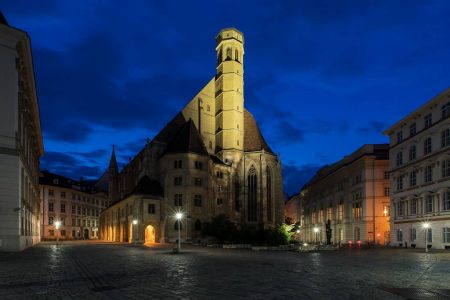 Amerie: Whoa! Wait! You’ve created a new Foundation? Your reach has just become global! I told you that you were going to turn into the Tyra Banks of Opera! But what does that mean? Are you just going to focus on your philanthropy work and take a step back from performing for a while? Are you winding down your career?
Kristin: No, absolutely not! In fact, I am in the midst of preparing 2 new roles that I will debut this season. I will perform the title role in Puccini’s Tosca at the Hamburg (Germany) State Opera; and l will make my American debut at Dallas Opera, singing the title role in Puccini’s Manon Lescaut. So, no, I’m definitely not winding down my career in performances. (Laughing) I simply feel called to give back to the next generation of top musicians.

Amerie: Now that you’ve gone global, what’s the purpose of Kristin Lewis International?
Kristin: That’s a good question. The mission is to provide professional and practical resources to emerging artists, in order to further refine their talents and aid in their artistic development. Vienna is the ideal location because of its many resources. It is a haven for “the best of the best.” To be able to provide an opportunity for young artists to study and further develop their talents gratifies me with a level of fulfillment that is second only to being on stage.

Amerie: That’s a wonderfully ambitious goal that I pray is fully realized. I do have a question though…
Kristin: What is it?

Amerie: Um… As you continue your Vienna concert series… could you like… ask Adam Driver to come moderate one of your concerts….?
Kristin: Adam Driver?

Amerie: Yes! He’s my favorite actor. He’s the Supreme Leader of the Galaxy! He’s Darth Vadar’s grandson….Luke Skywalker’s nephew. The child of Princess Leia and Han Solo. And he is a classically trained actor who went to Julliard. Perhaps he would appreciate being a part of this.
Kristin: It sounds as if you really would like to meet him…and you’d like my help in doing so. Establishing a connection to Hollywood might be “in the cards” sometime in the future…who knows? (Laughing) I forgot how much you love Star Wars… But please, one step at a time.

Amerie: I do. So Jedi mind tricks aren’t gonna work with getting me what I desire?
Kristin: (laughing) That’s probably not a good look.

Amerie: I tried.
Kristin: You did…. (laughing) Is there anything else you’re considering using or have in mind for Jedi tricks?

Amerie: No, but I do hope that you will keep progressing and moving forward because this venture has the potential of making a huge impact on the world. Thank you for answering the call to improve the quality of life for others. Thank you for using your superhero powers for good.
Kristin: Aw… Thanks…

Amerie: Well, there you have it folks, coming to you straight outta Vienna!