The Austrian conductor Michael Lessky comes from a highly musical Viennese family with roots in Upper Austria. His training as a conductor was with Karl Österreicher at the Vienna Music Academy, acquiring additional important impulses by frequently assisting Claudio Abbado at the Vienna State Opera as well as with the Gustav Mahler Youth Orchestra. In addition, he studied law, piano, organ, church music and the theory of jazz in Vienna. 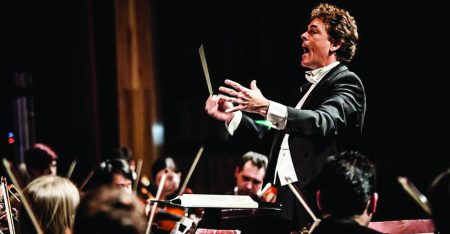 In 1995, together with Ildiko Raimondi, Hans-Peter Blochwitz and Bernd Weikl as soloists and the Austro-Hungarian Haydn Philharmonic Orchestra, he made his successful debut in the Vienna Musikverein conducting Haydn’s Creation. This was the starting point for many successful concerts with masterpieces such as Verdi’s “Requiem“, Mozart’s “C-minor Mass“, Bruckner’s “Te Deum“, Brahms’ “Requiem” and numerous works of French and Italian repertoire.

Maestro Lessky conducted successful productions of the “Magic Flute“ and “Nabucco“ with the St. Margarethen Opera Festival in the seasons 1999 and 2000. These productions were integral in establishing the festival as the second largest open air operatic summer festival in Europe. 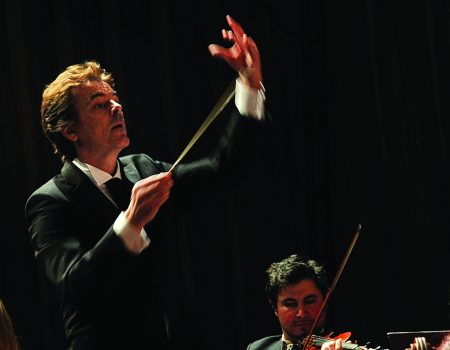 In 1997 Maestro Lessky founded the Austrian national youth orchestra “Vienna Young Philharmonic Orchestra“, which under his direction became the Austrian “elite orchestra of the next generation”, according to Austrian radio ORF and the daily paper “News”.

In 2001 Maestro Lessky was invited to the Histria Festival in Pula to conduct Verdi’s Requiem; and in 2002 he conducted Mahler‘s 2nd Symphonie at Vienna’s St. Stephan cathedral. In 2003 and 2004 he and his orchestra were named official “Cultural Ambassadors“ of Austria in China. By the Mozart-Year 2006, he was elected to conduct a new “Cosi fan tutte“ production in Vienna; and José Carreras choose him as musical director for his project entitled, “Belle Epoque,” with CD-production and Gala-concert at Wiener Konzerthaus. A highlight in the 2007-08 season was the Wiener Musikverein “10 Year Jubilee Concert“ of Junge Philharmonie Wien, with guest opera stars Agnes Baltsa and Ildiko Raimondi. In 2009, Maestro was engaged for the Jubilee Concert of Vienna’s Schubert Society with “The Great“ symphony at Wiener Konzerthaus.

2011 invitation to the “Austria Festival“ in Germany, Saarbrücken with a program of Webern, Liszt, Willi and F. Gulda. At Wiener Konzerthaus, he conducted the Requiem of Mozart.

In 2013, he was engaged for two Wagner-Galas with soloists of the Bayreuth Festival in Germany with excerpts of all operas of Wagner. In 2014 were acclaimed performances of Schönberg‘s „Pelleas and Melisande“-symphony, Beethoven‘s Violin-concert and a new collaboration with Accademia of Teatro alla Scala in Milano of Rossini’s Stabat Mater.

In 2015 Maestro Lessky was a guest at Ravello-Festival in Italy and for the first time in South America at Grand Teatro Nacional in Lima with Mahler‘s 4th symphony and Berg’s Violin-concert. He has released CD recordings of Mahler Symphonies Nos. 2, 4, 5 and orchestral songs of Strauss, Schubert, Mahler, Zemlinsky, Webern with Vienna state opera’s sopano Ildiko Raimondi and of particular value the live recording made, too, with Vienna State Opera’s soloists at Vienna’s Redoutensaal for Sony BMG.

In 2017 he was awarded the Austrian Cross of Honour for Science and Art.
During the 2018-19 season, Maestro Lessky will be featured as Guest Conductor of the Malta Philharmonic Orchestra and the Orchestra Sinfónica del Sodre Montevideo. 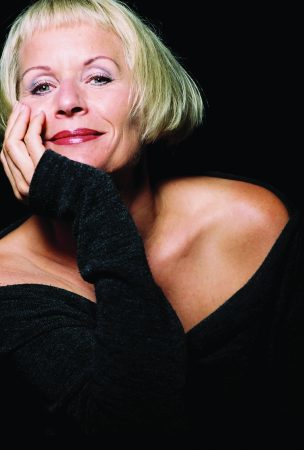 A long-standing television and radio presence makes Heilwig Pfanzelter one of the most famous voices in Austria. Born in Bludenz, Vorarlberg, she studied acting at the Landestheater Innsbruck, with vocational training from Ingrid Olofson and Marcelo Onofri. Since 1986 she has lived in Vienna, and has received acclaim from theater engagements and solo appearances in the Metropol Wien, Theater Drachengasse Wien, Goldener Musikvereinssaal Wien, French Embassy Vienna, Brucknerhaus Linz, Schloss Landeck, Kongresshaus Millstatt and many more. She is a moderator for company events, a spokeswoman of industry, corporate video and advertising and is a telephone band voice. She is a teacher of voice and rhetoric, and is a speech therapist.

Hailed as “A whirlwind at the piano, a sensitive musician with excellent technical skills and phenomenal pianistic expression,” the Austrian concert pianist of Bulgarian descent, Donka Angatscheva, made her debut as a soloist with the Plovdiv Philharmonic Orchestra at the age of ten. During her youth, she studied with Milena Mollova (a student of Emil Gilels), and furthered her studies with the famous pianist and teacher Heinz Medjimorec, a member of the Haydn Trio, at the University of Music and Performing Arts in Vienna. She performs frequently with her ensemble, Trio d’Ante, including Vienna’s Musikverein in 2006 and 2010. She completed her chamber music studies at the Queen Elizabeth Music Conservatory in Brussels. 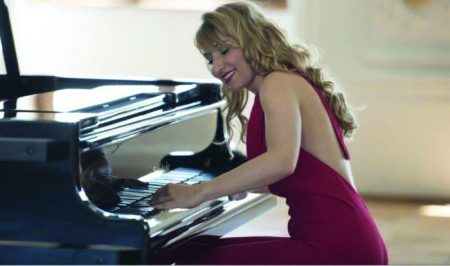 With an impressive discography of eight CDs, Ms. Angatscheva has performed at famous music venues and renowned festivals including Fundación Carlos de Amberes in Madrid, Sala Maria Cristina, Málaga, Apolonia Festival, Bulgaria, Kunstzentrum Art St. Urban, Switzerland, Tonhalle, Zürich. Her Trio was invited to the Festival de Radio France et Montpellier, Festival de musique de Menton, France, and to the Chopin Festival at the Cultural Centre Flagey in Brussels. She has also performed in the Mozart Hall of Vienna’s Konzerthaus, and in the Great Hall of the Palais de Beaux Arts in Brussels. 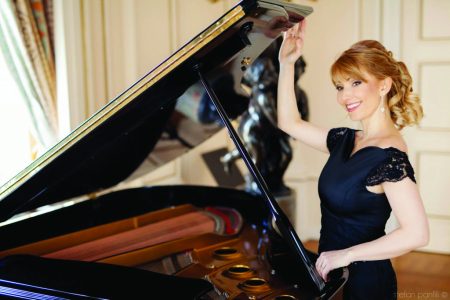 Ms. Angatscheva has been a piano lecturer at the Conservatory of Music in Vienna since 2013 and since 2018 at the well known Amadeus International School Vienna. In summer 2019 she will be artistic director at the first International Beethoven Youth Piano Chamber Music Competition in Switzerland.

On September 15th, 2018 Ms. Angatscheva will perform together with Yuri Revich at the Musikverein Brahmssaal. http://angatscheva.com

Teodora Miteva was born in Ruse, Bulgaria and started playing the violin at the age of four, under the guidance of her mother. However, one year later, she discovered her love for the cello. She made her solo debut with orchestra at the age of 18 in her hometown, performing Lalo’s Cello Concerto. A few years later she was granted her Master’s degree with honors at the University for Music and Performing Arts in Vienna, as a pupil of Prof. Valentin Erben (Alban Berg Quartet). She has performed as a soloist with several international orchestras, including Orquestra Philharmonica de Salta (Argentina), Orchestra Estivo di Cervo (Italy) and Orquesta Philharmonica de Quito (Equador). During the “Haydn-Years,” she played the Haydn cello concerto in C Major in the well-known concert Brahms Hall and Golden Hall in Vienna’s Musikverein under the batons of Christian Schultz and András Deák. 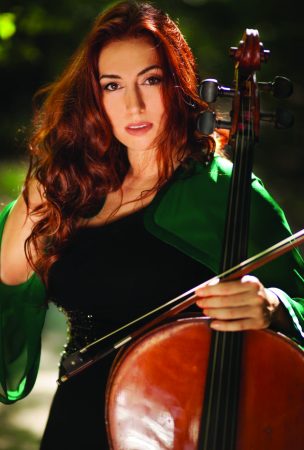 Ms. Miteva has performed as a soloist at the “Wieder Festwochen”, in the City Hall Hong Kong, at the Bourglinster Festival in Luxembourg, at the Aaron Copland Festival and many other international musical festivals. She is an award winner of the Cello Competiton in Bulgaria and has been awarded famous scholarships, such as the Herbert von Karajan Centrum and the Alban Berg Foundation. Together with Peter Schmidl, the Solo Clarinet player of the Vienna Philharmonic, Ms. Miteva has recorded Clarinet trios by Beethoven and Brahms for the Naxos Label. 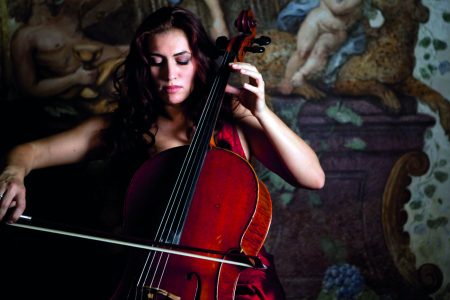 Ms. Miteva has been enjoying a very successful performing career with her ensemble, Trio D’Ante, which included being awarded first prize in 2007 at the International Chamber Music Competition in Thessaloniki, Greece. Thanks to their outstanding performances in many prestigious festivals, the ensemble also won a scholarship for the renowned Queen Elizabeth College of Music Academy in Brussels, studying with the Artemis Quartett. In 2010, the ensemble’s debut album was published by Gramola with works by Astor Piazzolla and Enrique Fernandez Arbós. The CD presentation had a great success at the Vienna Musikverein, in Switzerland and in Spain – with an excellent resonance in the Austrian media and the international press. In 2010, Trio D’Ante played in the Mozart Hall of the Vienna Konzerthaus, which was followed by an Austrian tour organized by Jeunesse in the 2011/2012 season. Ms. Miteva plays a cello made by Honoré Derazay, Paris 1860.
https://teodoramiteva.com